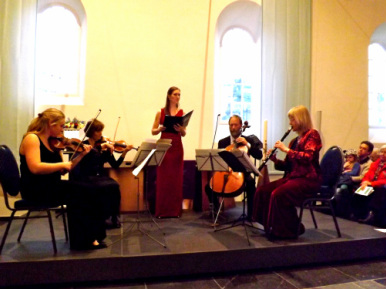 Prunella Pacey had her first chamber music experiences playing the Mozart Trio with her parents (piano and clarinet) at home where the family enjoyed regular chamber music parties. She was recently moved to rediscover her very first LP (1977) of The Musical Offering by J.S. Bach on which her own sound is still recognizable. Whilst still at school she spent a lot of time playing string quartets and was subsequently a member of a quartet throughout her whole life with the exclusion of one "sabbatical year."
The foremost quartets she belonged to were the Allegri, Mondriaan and Goffriller (formerly Camilli) String Quartets. Her student Quartet (Komori) was the first prize winner at the Haydn Competition at Eisenstadt.
Other flexible chamber groups in which Prunella collaborated include Bay Chamber Concerts (U.S.A.) and the Rondje Players with whom Prunella played countless concerts in the Amsterdam Concertgebouw.
The Arto Ensemble (www.krommerijnconcerten.nl) is a long-standing group having enjoyed 18 seasons of chamber concerts at their home platform in Bunnik, Netherlands. The group has recently been joined by the two daughters of the founding members, Amarins Wierdsma (violin) and Rosina Fabius (mezzo soprano).
With her partner the cellist, Guus Fabius a unique repertoire has been collected over the years, (Duo Pacey- Fabius). As they had foreseen during the busy years of parenthood there is finally time to expand this repertoire! In the form of the Fabius Ensemble they are joined by their daughter Rosina Fabius (mezzo soprano) for intimate concerts and at weddings.